To understand how a sensory input leads to a particular behavioral output, we are studying prey capture behavior in zebrafish larvae. First, we would like to describe the behavior in a quantitative manner using several parameters (position, swimming speed, approach to prey, eye convergence, etc.). These parameters may be obtained automatically by image processing. For a successful image processing, lighting condition is a critical issue.

Here are some tricks that make it possible to isolate zebrafish larval eyes and paramecia from the background.

I came to this solution after a bit of trial and error. 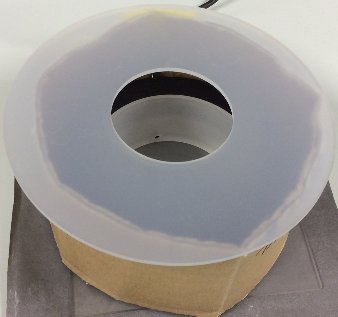 This is a darkfield illumination but the background is not too dark.

One zebrafish larva was placed in a recording chamber (diameter: 20 mm; depth: 2.5 mm; CoverWell Imaging Chambers PCI-A-2.5, Grace Bio-Labs, Bend, OR, USA), which was attached onto a glass slide. Approximately 30 paramecia were placed in the recording chamber, with a cover glass on top. The recording chamber was illuminated with a ring LED light (Model: LDR2-100SW2-LA, CCS Inc., Kyoto, Japan). The larva and paramecia were imaged with a stereoscope (SZX7, objective lens: DF PL 0.5X, Olympus, Tokyo, Japan) equipped with a CMOS camera (xiQ, Product number: MQ042RG-CM, Ximea, Lakewood, CO). Image acquisition was controlled by custom-made software developed on LabVIEW with the xiLIB (a LabVIEW Interface for XIMEA Cameras, https://decibel.ni.com/content/docs/DOC-29025). After time-lapse recordings, the number of paramecia left in the chamber was counted using the particle analysis function in ImageJ. Probability density function for the prey locations at the moment of prey capture behaviour was estimated using kernel density estimation in Matlab. Eye convergence was defined as the state in which the eye vergence angle17,50 was more than 50°. https://www.nature.com/articles/ncomms15029

So, the paramecia appear in white and the zebrafish larval eyes appear in black on the gray background.

Uniform background and enough contrast for both the zebrafish larva and paramecia.

Image registration with TurboReg in ImageJ

During the time-lapse recording, the zebrafish larvae often make movements even  in the agarose. Therefore, we need to r...

Here is what I would do to plot calcium signals from multiple neurons after time-lapse imaging. The brain images (GCaMP ...

Sometimes I need to put zebrafish larva in the recording chamber from the beginning of a recording and still want a back...
Batch processing of behavioral data ~ How to anlyze locations of individual animals
Prey capture assay for zebrafish larvae ~ Counting the number of the paramecia
ホーム
ImageJ