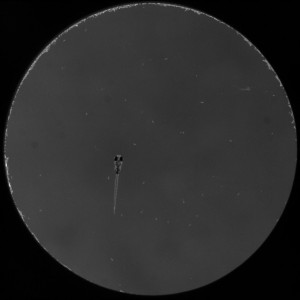 How can I count the paramecia in ImageJ? First, I obtain a background image by making an averaged image. To do this, call Image > Stacks > Z Project… > Average Intensity. 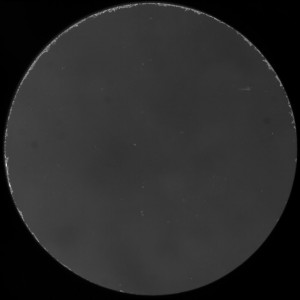 (Note that embedded image is in JPEG just for the sake of reducing the file size on this blog).

Image > Adjust > Brightness/Contrast… > Auto, then Image > Type > 8-bit . Now you can clearly see the paramecia in a uniform background. 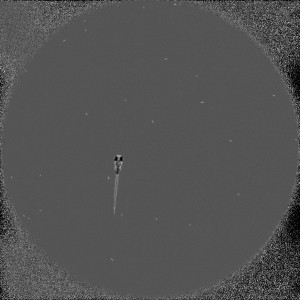 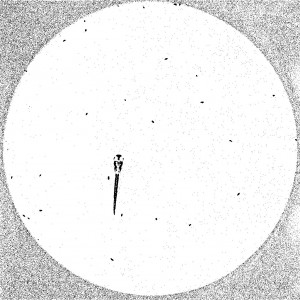 As a result, the paramecia are extracted. This is the “Mask of ..” image (Different frame from the above). 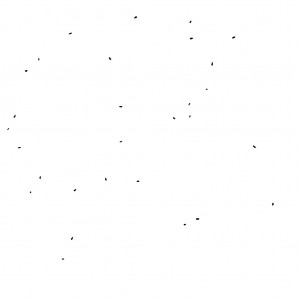 The text window named “Summary of ..” gives the “Count”. The numbers fluctuates among frames because some paramecia may be missed because they were near the edge of the chamber or there happened to be some noises in each frame. Because I don’t need exact paramecium count frame-by-frame, I average for 1-min interval (moving average for 600 frame time bin on Excel). What I need in this experiment is to know how many paramecia are consumed over minutes. A typical result looks like this (after averaging). On average, this zebrafish larva captured one paramecium in every 15 seconds. 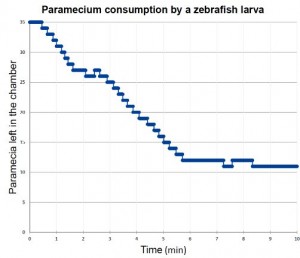 Particle analysis is a slow process (depending on how many particles are present in the image). In my case, one file takes about 30 min. So, it will take 15 hours to process 30 recordings. It is exhausting if I need to do it manually. Spending some time on writing an ImageJ macro can save a huge amount of time and energy.

Note: I found that a large (>6GB) stack could not be saved properly in AVI or TIFF format. Only RAW format worked in my macro for unknown reason.

By the way, you do not need to write a macro from scratch. Macro recording is available. Plugins > Macros > Record…  This does not do everything that I want but it helps a lot.

In behavioral studies, we want to analyze the locomotion. If we work on a single individual, we can easily obtain the po...

Counting paramecia in Fiji/ImageJ with pieces of macros

ImageJ Macro writing takes some time. When the number of the files to be processed is not extremely large, doing it manu...

I am using Hamamatsu Photonics ORCA Flash 4.0 with the accompanied image acquisition software, HCImage. After time-lapse...

Activation of the hypothalamic feeding centre upon visual prey detection

I uploaded a submitted manuscript onto the BioRxiv and some of the supplementary movies on Youtube. Akira Muto, Prade...
Prey capture assay for zebrafish larvae ~ The lighting system
NI-IMAQdx missing in the function palette
ホーム
ImageJ Macors